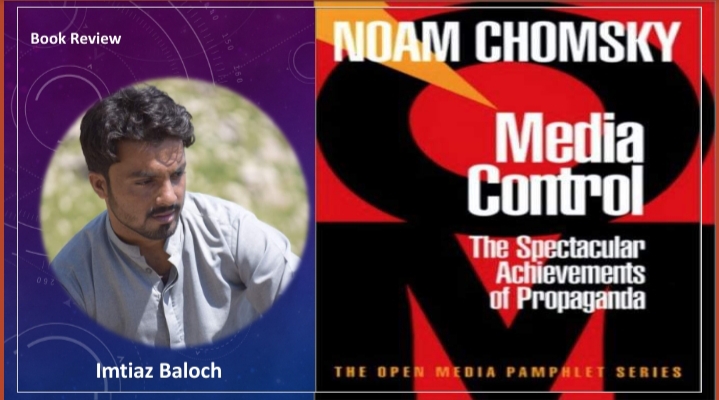 Media control is one of my favorite books in my books collection. This book was written by an influential writer, Noam Chomsky and this was recommended by a book lover friend in a circle during an exchanging of views about the media and the persuasion process of masses for the different causes and multiple new orders in the world as well as America.

Reading to this book an overview comes to my mind that the author is also inflective by the Americans because of their subjective analyzing to the American media and American masses in a lot of different contexts. I found that the author supernally examined the functioning system of media. Moreover, Chomsky also accentuated the role of liberal media throughout in his book.

Chomsky’s this worthy writing has become a source for us to enhance the knowledge about the role of media and the narrative building to persuade the people of the world or control their mind about public affairs as well as their role to accountable Governments for any misbehavior toward the masses.

At the opening ceremony of this book, I wondered about the role of the American government in the middle of world war 1 to change their specific people into warmongering by using their well-functioning propaganda tools to become the part of the European war. Woodrow Willson administration had established a commission called the Creel commissions and within six months, the commission had succeeded to turn the specific population into a war-mongering population. The intellectuals had also enthusiastically participated in the John Dewey’s circle, who took great pride in his writing, hence the administration also controlled the thoughts of more intelligent people of the community.

At the other part of book, Chomsky mentioned about Walter Lippmann, who was a liberal theorist and argued about the revolution in the art of democracy could be used in manufacturing consent. Similarly, Lippmann said that there are classes of citizens,one is that who are involved in running general affairs, that’s the specialized class they run the economical, political and ideological system and the other who is in the big majority are bewildered herd and their function in a democracy is just like a spectator through manufacturing consent the media, school and popular culture are also divided and for the political class and decision-makers they have to provide them some tolerable sense of reality they are also installed.

Moving towards the next here we found the major response was taken on the part of businesses community which spend a lot of money, attention, and thoughts how to deal with the problem of the labor party’s policies to counter the Democratic deviation by using the public relations to properly distracted the people. Through Engineering opinion authority distracted the people and their sentiments through extensive propaganda and at the time of gulf war hysteria, to instill in people respect for the Martial value that is also a distracting way to emotionally engage the people through values and sentiments.

For the authorities, it’s important to overcome the major aggressors. During the Vietnam War, the American media repeatedly represented the falsehood as a reality to control the internal aggression. Indeed, they presented some spurious date of Vietnamese’s casualties, even the truth of the matter is buried under the edifice of edifice of lies upon lies.

Additionally, Chomsky wrote about the growing dissent culture in America. In 1960, American had witnessed many movements including the feminist movement, the environmental movement, and against the nuclear programme. During the time of feminist movement, there was a lot of propaganda eruption and justifying argument to use military forces to counter that movement and many people had also agreed to kill them. Similarly, the state chose a selective perception about anything happening, and the state promotes their cases through that in the Iraq Gulf War, we saw another side of media manipulation about their selecting one side of the story, at the time of war, we analyzed the subjective role of media to covering one side of the news. the American media totally ignored the stance of the Iraqi opposition about the American aggression on Iraq and they neglected the opposition ambition for peace through their well functioning propaganda system. At the end of the book, Chomsky said analysis opinion and facts require so much analysis to present an objective view which should be balanced.